As of this writing , the JCI posted a loss of 0.8% Ytd to 6,146 (+1.2% in USD term) and underperformed the region (MSCI Asia ex-Japan gained by 7.3%). This came on the back of  risks arising from escalation of global trade war while domestic macro environment is not supportive of equity market due mainly to i) slowdown in economic growth and ii) widening current account deficit (CAD). Earnings are also not looking good either with the blended growth has been revising down since 1Q19 due to earnings underperformance in commodities, retails, construction, poultry, property and cement sectors. These together have led to net foreign outflow of USD1.1 bn in Indonesia equity (including indexes rebalancing outflow). 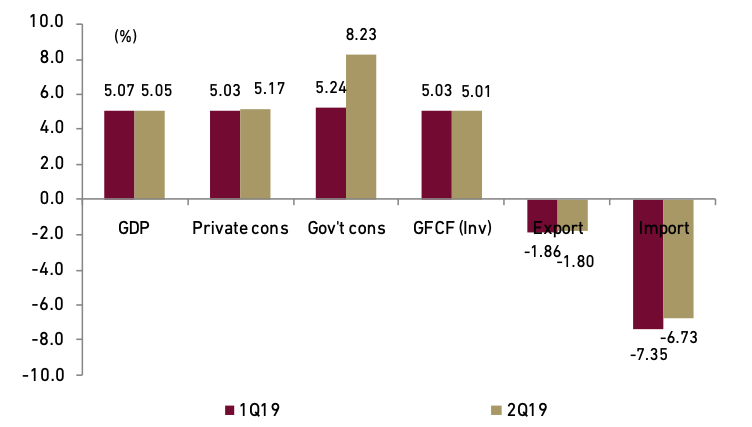 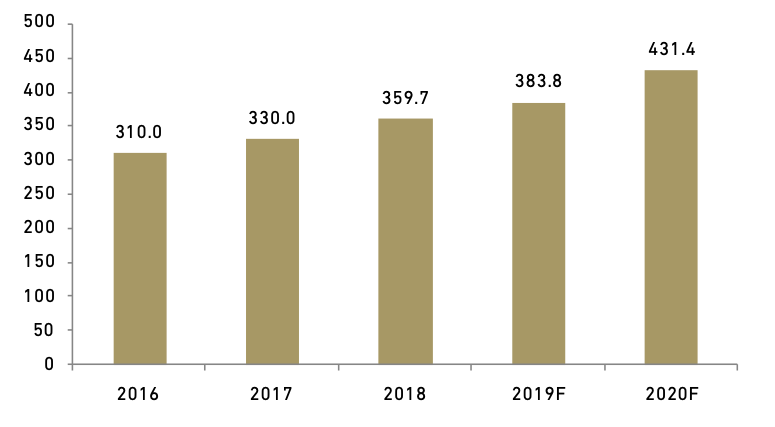 Due to the above unfavourable factors, coupled with massive student demonstration at end of September, Indonesia has witnessed foreign investors consistently selling-off their equity to over USD1.4 bn from mid-July to end September. This leaved year-to-date foreign net buy to USD3.6 bn from peak level of USD5.1 bn.  Foreign net buying would have dropped to only USD0.1 bn if we exclude cross trade when Japan’s MUFG bank purchased stocks at BDMN and BBNP shares for a total of USD3.5 bn. Based on data from KSEI (Indonesia Securities Depository), foreign ownership in equity also decreased from 45.1% in July to 43.0% in September (lowest level in 9M19). 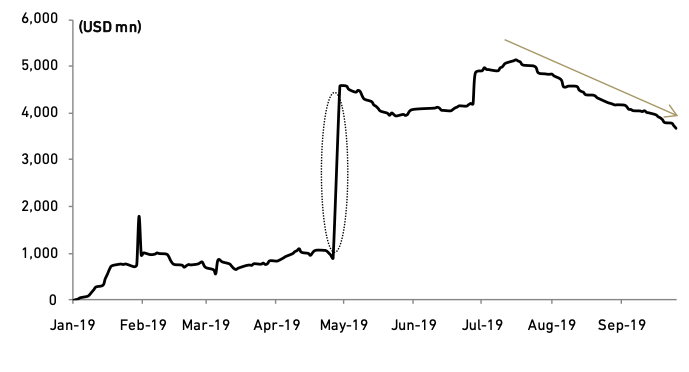 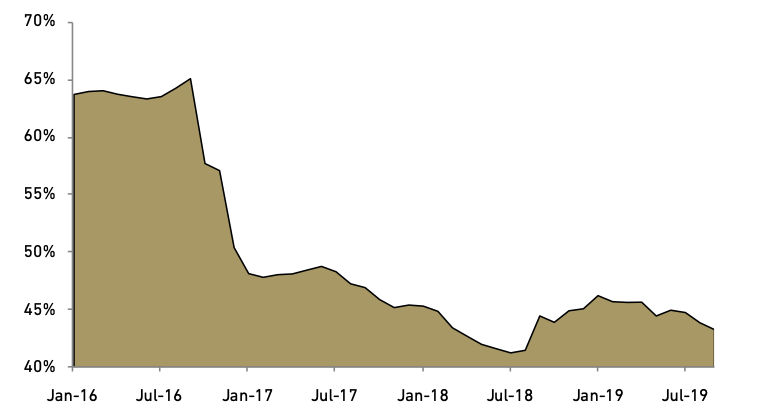 We looked at various stocks in JCI that have contributed the most to the decline to JCI year-to-date and have seen selling pressure. Among JCI constituents, large-caps led the lagging movers. These include: i) cigarette makers HMSP and GGRM , which dropped 34.6% and 34.0% and contributed to 129 and 48 points decline, respectively. This resulted from a) declined weighting  in LQ45 and LQ30 indices after a series of free-float adjustment and b) higher-than-expected 23% increase in excise tax (consensus: 12%) for 2020 prompting street to downgrade earnings and target prices. ii) automaker ASII which dropped 17.4% YoY (contributing 51 points decline)  on weak domestic auto sales (-13.5% YoY, despite ASII fared better at -8.1%) and prolonged weak coal and CPO prices. iii) poultry producer CPIN which was down 26% on softer outlook at broiler and DOC prices which does not justify its hefty valuation. BDMN was also among top laggards as the stock declined 38% negatively affected by MSCI deletion announcement. 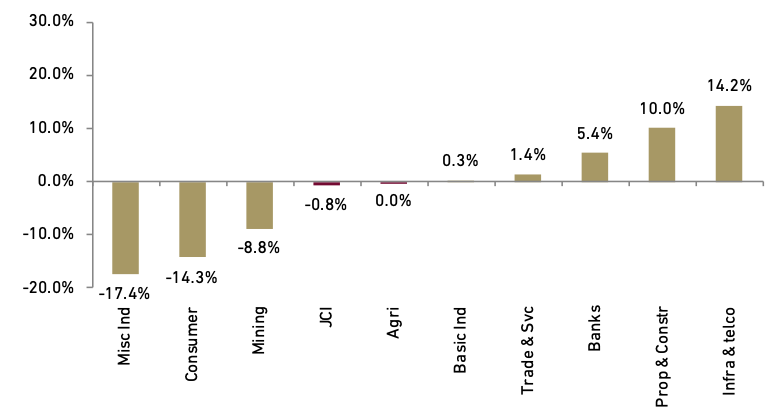 Recovery seen next year for stocks after poor 2019

Progress in China-U.S. trade talks remains bumpy as both sides have increased tariffs on imports from the other. Prospects for a successful agreement do not look promising in the short-term. However, we believe the US-China trade war tension would ease in 2020 and provide better stability to the financial market. US President Donald Trump is entering the 2020 election cycle, with pressure to stabilize the economic environment. Several indicators, including a rocky stock market, a briefly inverted yield curve, and fallout from a trade war with China, has caused worrying a slowdown could be on the horizon. The state of the economy is, historically, one of the main things voters consider when deciding whether to grant a president a second term. So if the US were to enter a recession, as some have speculated it soon might, this should affect President Donald Trump’s re-election chances. We assume Trump will want the optimal conditions of rising equity markets and decent economic activity going into the campaign proper, and a trade deal together with lower interest rates can deliver that.

The positive market sentiment is expected to be further lifted by the optimism of a wave of easing monetary policy by central bank (BI) given the subdued inflation and economic growth momentum.  We also expect that government to accelerate reforms to help boost sentiment which should support the impact of lower interest rates on investment growth. Moreover, we are of the view that domestic consumption remains supportive of the economy. Therefore, we believe equity markets will remain upbeat in anticipation of a lower interest rate environment to sustain Indonesia economic growth, albeit on a more moderate basis. We expect Indonesia GDP growth to improve from 5.0% in 2019 to 5.1% in 2020, driven mainly by improvement in GFCF which historically increased during monetary policy easing. BI shifted its policy stance to one that pre-emptively supports growth, suggesting a willingness to cut rates more aggressively. However, BI’s ability to follow through is likely to hinge on risk appetite, which affects the currency and capital flow. We expect another 25 bps rate cut in 4Q19, bringing the total reduction in the key rate to 75 bps this year to 5.00% and forecast another 50 bps rate cut in 2020 to 4.50%.

We expect 2020F market EPS to accelerate to 12.4% from 6.7% in 2019F (see table below).  We use aggregate earnings of our stock universe, comprising of 66 companies comprising of  72% of JCI’s market capitalization as a proxy to forecast market earnings. The growth will be boosted largely by the banking sector with net profit growing by 16.3% led by BBCA of 15.6%,  BBRI of 15.6% and BBTN of 84.9% (after negative growth of 40.5%). Other heavyweight sectors such as Automotive, Telco, and consumers also are also forecast to post double-digit earnings growth. 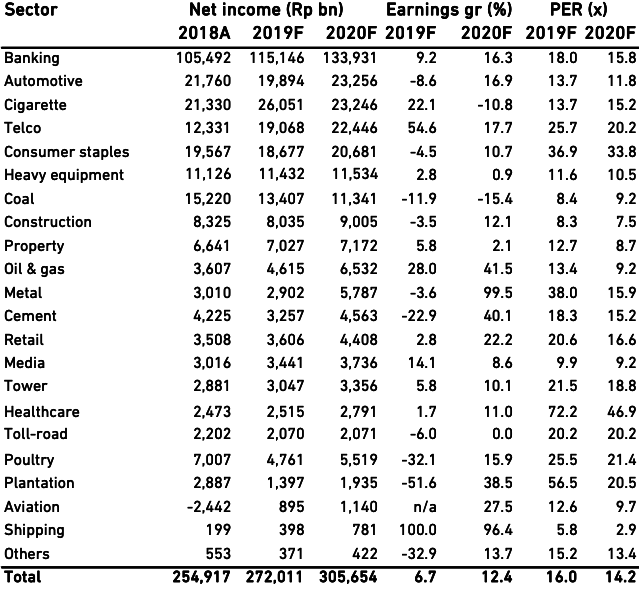 The Indonesian government proposed amendments to income tax and VAT regimes. The bill includes measures that would among others: 1) gradually lower the corporate income tax rate from current 25% to 20% starting 2021 2) reduce corporate income taxes to 17% from 20% for companies that go public for their first five years on an exchange; 3) require entities participating in the digital economy to report and pay VAT; 4) eliminate the taxation of dividends reinvested in Indonesia or paid to domestic entities with an ownership share of more than 25%. We believe this tax reforms are intended to improve revenue collection, increase compliance and attract investment.

We also believe lower tax burden could make Indo more attractive because similar taxes in other ASEAN countries are lower at 24% Malaysia, 20% each in Thai and Vietnam, and 17% in Spore, except Philippines of 30%. This should be positive for equity market as it would lift corporate earnings, lowering the valuation.  Some companies in particular industries may not enjoy lower tax rate such as 1) contractor and property which are subject to final tax of 2.5-4% of revenue 2) coal companies under CCOW which are subject to 35-45% income tax 3) oil & gas companies which are subject to 42-44% total income tax. Based on our on the back of an envelope, lower corporate tax rate of 20% would lift our corporate universe earnings by around 6.2%. From an FDI/investment perspective, it would also increase demand for industrial estate.

We reaffirm our year-end 2019 JCI target of 6,560 and introduce our year-end 2020 JCI target of 7,190, which is premised on market 15.5x PE ratio (-0.5stdev mean) and forward EPS of 464 which implies 9.6% YoY return, in line with market EPS CAGR of 10.2% in 2019-21F. Market valuation have turned attractive (forward PER of 14.2x) much lower than sharp correction witnessed during trade war turbulence in May-19. We see a further 8% correction from current levels would retest previous 2015 GFC low, where we can be reasonably confident equity markets will recover over a 6-12 month view. We believe expected positive catalyst in terms of i) better macro conditions and ii) a higher earnings growth coupled with iii) current underperformance to regional peers and iv) light foreign investor positioning will support our convictions to positive market outlook in 2020. We have not yet incorporated potential 6.2% earnings increase from lower corporate tax that we mentioned previously.