Indonesian property remains attractive with influx of Foreign Direct Investment (FDI) in real estate sector increased by 22% YoY and reached USD2.04 bn in 9M17. The rise in real estate FDI outpaced the total FDI growth which only improved by 11% YoY to USD23.88 bn. Up to 9M17, the contribution of real estate FDI to total FDI up by 72 bps to 8.5% from similar period in 2016.

Indonesia’s ongoing massive infrastructure development had attracted overseas developer groups from Asian countries such as Japan and China. Local property developer such as BSDE, ASRI and BEST have already benefited from the inflow through the establishment of JVs with several foreign developers. We believe the situation will improve further as we forecast Indonesian economic growth of 5.4% in 2018.

The residential property market is healthier than other subsectors as the growth in house price was more evidence and sustainable at 3.2% in 2Q17 and according to BI prediction will reach 4.0% in 3Q17. For 2017, evidence from leading developers points to quite a robust year. BSDE is targeting sales growth of 16% while ASRI is aiming for growth of 48%. Both companies appear optimistic to meet their targets. But for overall market, we expect moderate marketing sales growth of around 10-20% in 2018 as historically, growth has never sustained at 30% for more than a year albeit the base of comparison is lower.

As we project real GDP growth to strengthen to 5.3% in 2018, overall house prices should be strong and match 2017’s performance by rising 4-6%. However, we do not expect a strong price upsurge across the country unless the economy expands at a more rapid rate and overall confidence in the economy scales a new high. The house price index though still increasing annually, has been damped in the last three years and touched a new low of 2.4% in 4Q16. 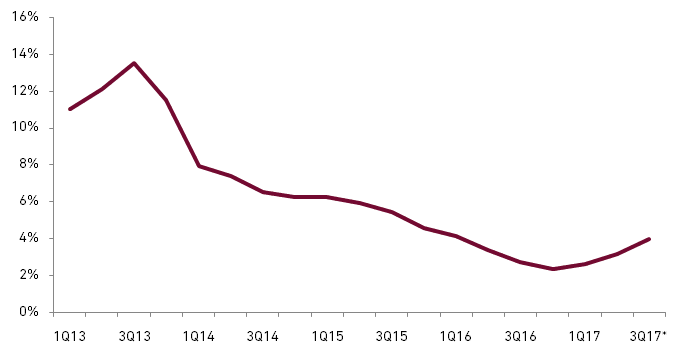 The Indonesia’s affordability for residential properties in general continue trending upward in 2017 due to lower interest rates as the benchmark was reduced by 50 bps in total. The extremely slow price appreciation of high-rise residential properties in Jakarta reflects the abundance of supply of such development. However, house price appreciation should be more pronounced in the coming years due to 1) traction gained from the MRT and LRT development within Greater Jakarta, 2) renewed confidence due to the economy’s strong performance, and 3) increasing scarcity of land closer to the urban centres.

Noted that the price of properties in Jakarta continue to appreciate though in slower pace as house buyers are less willing to commute long distance given rising transportation costs.

Prospect for commercial properties does not look promising as overall, there appears to be significant new supply coming in for all types of properties especially in Jakarta. According to Colliers International, there will be 485,500 sqm of newly available office space in 2018 coming in from eight towers in Jakarta CBD. The annual supply is slightly decreasing after more than 500,000 sqm addition of new office space scheduled to complete by 2017.

In line with the drop in occupancy rates, rental rates also came under pressure and were flattish. The office occupancy rate in Jakarta CBD is at all time low 83% in 2Q17 while occupancy rate slightly increased at TB Simatupang to 74.1% primarily due to the absence of additional supply during 1H17.   However, a breakdown of future new supply by geographical markets reveals some bright spots including shop houses in Greater Jakarta, retail space in Tangerang and Bekasi, industrial units in Bekasi and Surabaya, and hotels in Bali.

We remain confidenceproperty developer will thrive in 2018. We like DILD as our top picks as we expect higher revenue recognition from its high rise projects and BEST as the company will get a traction from ongoing infrastructure projects that surrounding its industrial estate coupled with increase in FDI. 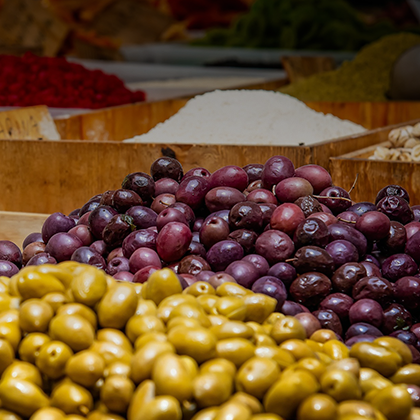