Banking sector performance is largely derived from the overall economy, given that they have loan exposures on every sector. It is not surprising that banking industry has been hit severely by Covid-19 pandemic in 2020 with loan growth touching the lowest level in more than a decade (1.04% YoY in Aug-20), NIMs were significantly lower due to delay in loan payment, and asset quality quite worsening as most of the loan segment faced greater failure risk. Bottom line in the banking system is expected to drop by at least 30% in 2020F in our view, as banks under our coverage which is dominated by big and more defensive banks are forecast to post around 29% decline in its bottom line. We see the hit has been fully priced-in in the market, with consensus expecting 38% earnings drop for the big four banks in 2020F.

For 2021F, we see the pandemic would still bring some impacts. Some of loan portfolio would still need some restructuring scheme in our view, weighing down the NIM to come back to the pre-Covid level. Some of the restructured would also fail to be maintained as performing loan and fell under NPLs. Despite the remaining impact from 2020F, we believe both of NIM and CoC metrics should fare better in 2021F compared to 2020F, and it should enough to drive total earnings to grow by 52% and back to the 2019 level. Business is expected to gradually back to normal, hence loan demand should also pick-up. Other earnings driver such opex efficiency would also stay in place considering the new normal habit. Overall we see earnings would rebound in 2021F with almost all substantial metrics shows improvement.

Exhibit 24:  Earnings growth for banks under our coverage​ 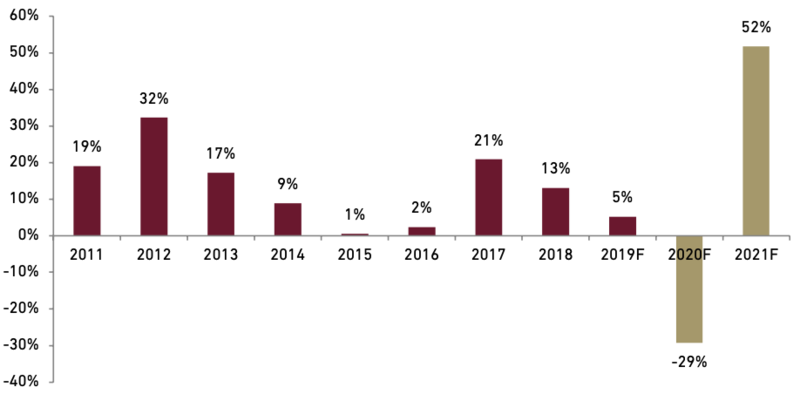 Loan growth deceleration mainly came from working capital loan and consumer, while investment loan has become the main support of loan growth. Working capital loan decelerates as many of debtors limit their operation hence less utilization of the loan facilities from banks. While on the consumer segments, deceleration came in all sub segments, i.e. mortgage, auto, and credit card due to subdued demand. We believe the bottom of loan growth should have been seen in 3Q20 as we foresee the economy to continue to recover gradually. This is despite some setback from re-enactment of PSBB in Jakarta in Sep-20.

We also believe the transmission of monetary expansion to take impact by early next year. Consumer loan segment, in our view, especially in certain segment such as mortgage and auto, should be sensitive to rates and should see a pick up after the banks transmitted the lower interest rate into the lending rates. We believe BBCA would be the main beneficiaries on this better consumer growth next year considering its dominant market share along with abundant liquidity in the bank’s book. Other segment (micro, medium, and corporate banking) would have a better loan growth once the business confidence regained, which we expect in late 2Q20. We see loan growth for banks under our coverage will slightly rebound to 4% YoY by 2020F (from 3% as of 8M20) for banks under our coverage, and further recovered to 10% YoY by 2021F.

Exhibit 25:  Loan growth vs deposit growth in the system​ 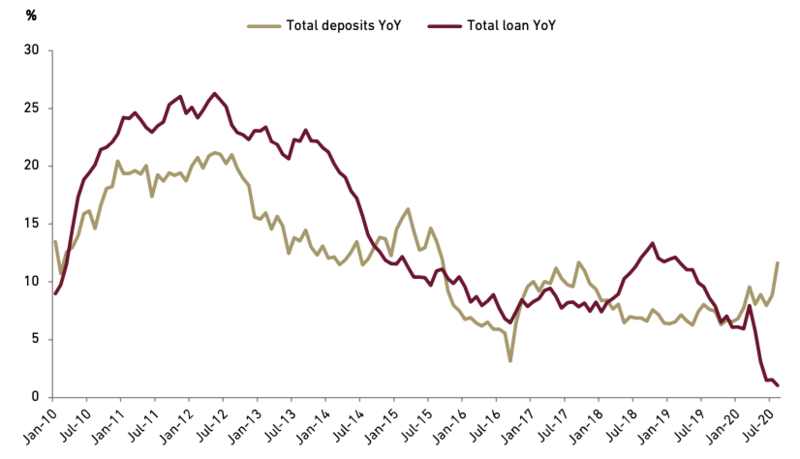 The period of subdued loan growth has resulted in an era of abundant liquidity. LDR tracked much lower to touch the lowest level in the last eight years. But those excess of liquidity was mostly enjoyed by big banks as the deposit growth only grabbed by those banks with good funding franchise. This is showing a flight-to-safety trend where customers’ deposit shifted to bigger and safer banks in the middle of pandemic. Aside the big four banks, mid-scale banks with relatively better funding franchise such as BBTN and BNGA also enjoyed the pickup in deposit growth and >1000bps Ytd reduction in LDR.

Banks currently place their excess liquidity on the financial instruments as long as it still provided positive margin. The ownership of bonds by commercial banks has increased by 53% YoY as of Jul-20 to achieve 14% of earnings asset, with placement by BUKU IV bank category increasing the most at 80% YoY as of Jul-20. 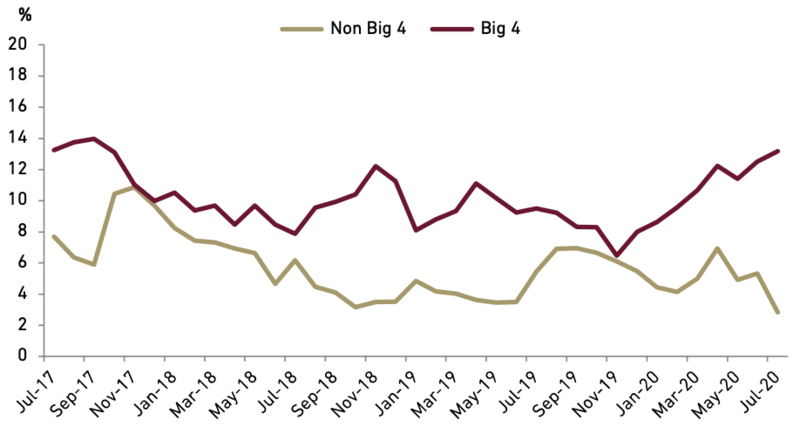 We see the excess of liquidity should help the big and mid-scale banks to further reduce CoF, which has come faster than our expectation in the last two months. We see the TD rates in all the big banks has come down by ~100 bps in the period of Aug-Sep with board rate in the four banks stood uniformly at 3.5%. We think this would trigger smaller banks to also reduce the rates. Moreover, the SOE banks would also enjoy some additional liquidity in 4Q20 coming from the National Economic Recovery (PEN) program phase 2, which amounted at Rp17.5tn (total placement is Rp47.5tn in phase 1-2). This funding placement came with lower CoF at 2.8% (vs. 3.4% in the previous placement). 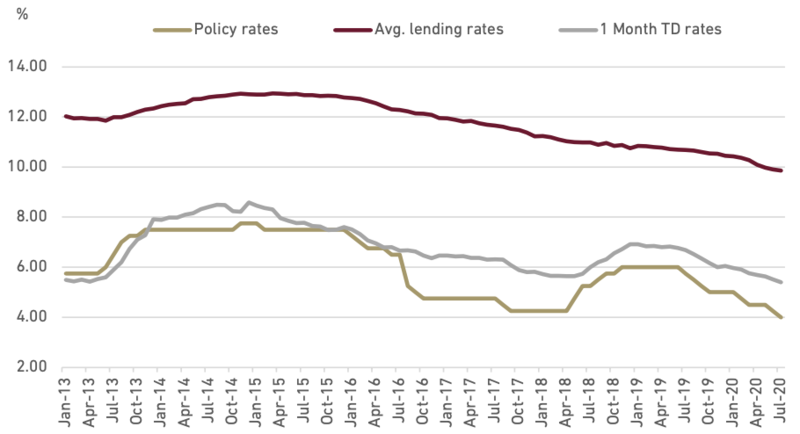 We see support from cheaper CoF and excess of liquidity would only help banks in the short term, as loan yield was structurally track lower in the long term due to subdued loan demand and balance the cheaper CoF. We project NIM to start rebound in 4Q20, and continue until 2021F. Although the impact of cheaper CoF and abundant liquidity should still linger next year, but we project that NIM post-normalized economic in 2021F to still arrive at lower level than pre-Covid as we expect some remaining restructured loan to be extended beyond 1Q21 coupled with a lower loan yield environment overall.

Exhibit 31:  Banking NIM estimates for banks under our coverage​

Our current expectation is that 10-15% of the restructured loan would fell into downgrades, with around one-third could be downgraded into NPLs. We also didn’t see the re-enactment of PSBB scheme in Jakarta on Sep-20 to impact in another big wave in restructuring trend. We see the scheme is quite limited to certain sectors (i.e restaurant, retail, transportation) with adjustment in loan scheme and customers’ operational has already been in place.

Exhibit 32:  Restructuring progress on SOE banks (as % of total loans)​ 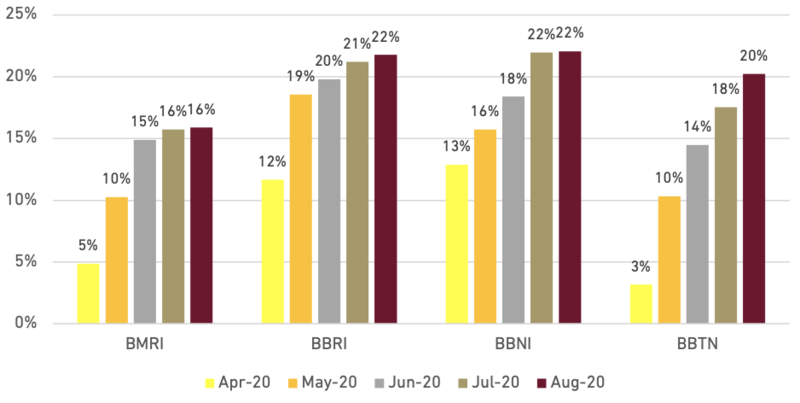 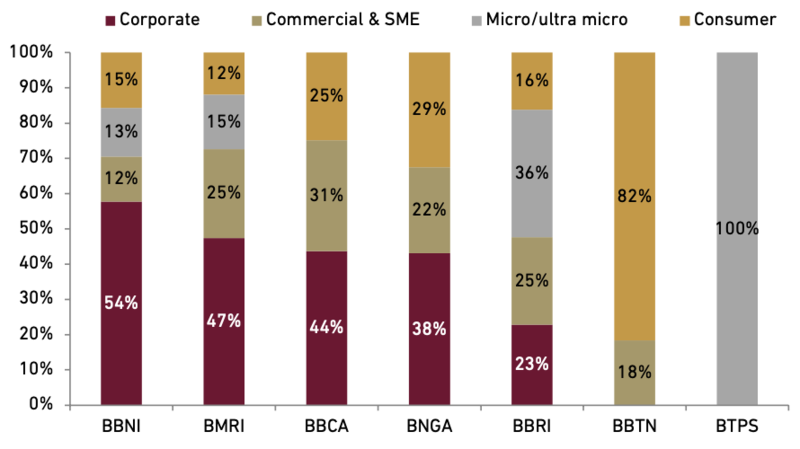 Given that earnings has been severely hit on NIM pressure, contribution from non-interest income is still somewhat minor, and cost efficiency already at the optimum level, Cost of Credit (CoC) would be the next crucial earnings driver. CoC is expected to peak in 2020F given that restructured loan book has been mostly in place. Banks has calculated its loan loss measurements based on the restructured loan book, with loss criteria remains being conservative despite the asset quality relaxation from OJK. Given the slowing new restructured trend, we believe 2Q-4Q20 would be the peak for provisioning.

As the result, we see the loan loss coverage for aggregate banks has dramatically jumped in 2020F. Significant addition to loan loss also contributed from the IFRS 9 adjustment in the beginning year. In total, we see this level of coverage should be sufficient to cover the potential NPLs in 2021F when pandemic expected to end. However substantial risk remains should the impact of pandemic fall longer than our expectation or the impact of pandemic go more severe than expected. 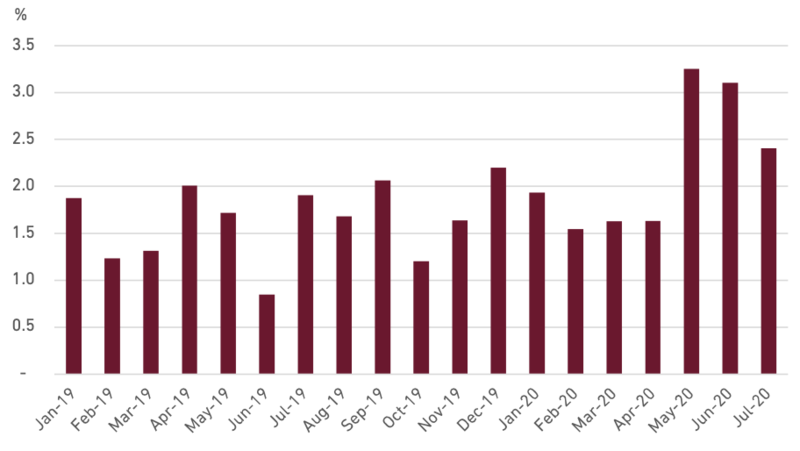 Pandemic also accelerated some new initiatives on cost efficiencies in banking sector, for example on automation and reduced-physical absence of employee, which has enabled them to push down opex to low single digit growth for the first time in 2020F. We think this is already the optimum level that the bank could achieve. We expect a slightly higher opex growth at high single digit for 2021F, as we expect the efficiencies to continue but coupled with some shifting from the delayed capex from 2020F to 2021F.

We maintain our Overweight stance on banking sector with BMRI and BBRI as our top picks. Our thesis remains that recovery in earnings will take place in 2021 lead by better loan growth, a recovery in NIM, and normalizing credit cost following a downtrend in loan restructuring. The stability of the banking system during covid-19 pandemic is also not a concern given the solid balance sheet and capital (capital ratio and tier-1 capital ratio stood at 21/19% as of Jul-20, respectively), coupled with continued support from the government considering the banking system’s pivotal role in economy.

Valuations for the Indonesia banking sector are still compelling in our view, especially in the times of economic upcycle next year. Banks under our coverage currently trade at 2.3x forward PBV, below its historical average of 2.5x. While excluding BBCA, our coverage is trading at 1.3x forward PBV or -2stdev, at the lowest of their historical trading range.

Our banking stock mapping shows that, within the big banks universe, BBRI and BMRI both have relatively compelling valuation considering its ROE profile in 2021F. Among the smaller banks, BTPS also have a relatively attractive valuation. However we think we would stick into the big banks for next year as we riding on the economic recovery while at the same time still facing the risk from longer-than-expected impact of pandemic.

Key risks for banking sector would come from a more severe economic impact from the re-tightening of PSBB or longer-than-expected pandemic impact. This could merge into a new wave of restructured loan and affecting cost of credit along with NIM negatively. Another risk is also the steeper-than-expected rise in LDR while economic resumes, as not all the liquidity came from stable source like saving deposits. 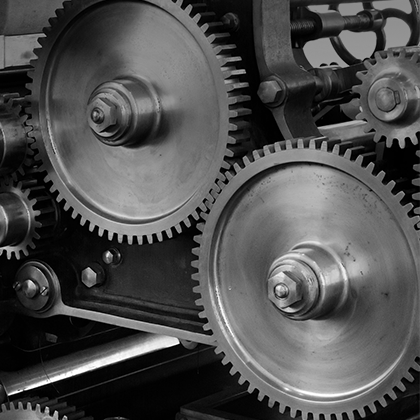 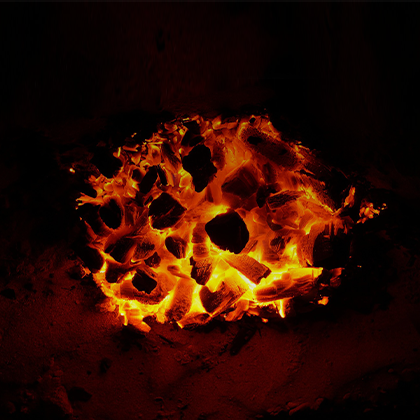